For Reasons I'll go into another time, it was a while before I properly met B, I remember it like it was yesterday, a sunny late afternoon in May 2017. It was also the first time Luke has B in his own care, so this day was a special one.

We met at a park, my son came too. We'd already shown him pictures of B and had spoken about who she was, so he was aware of her and looking forward to meeting her.

B didn't bat an eyelid when I got there, she was way too busy playing with Luke and how do you get a 2 year old to stop launching herself down the slide to say hide to hi so some random person? She didn't care I'd left work early to drive the 40 minutes in rush-hour traffic to come see her, cheers then B! Then to stop it all off she called me 'the lady', seriously child, I have a name. But to her I was just another person in the park, so her acknowledging me being there was as I could hope for at this point.

During that drive, I thought I'd get there and when Luke told her who I was she'd say hello and want me to help her around the park. But reality was - she didn't, she wanted her Dad. Of course she wanted her Dad, she didn't get to see him an awful lot at this time, so why would she want me to be getting in the way of her precious time with him. She had no clue I loved her dad or that we were in a relationship, she had not idea I already cared for her even though we had no contact before then.

It was soon time to take her back home, I didn't feel it had gone very well, and wanted more time to be around her, but had to wait until the following week for that to be possible. I thought it would only take a couple of meetings for her to know and like me, but as you'll read, it was nothing like I thought it would be. It was a whole lot harder than I ever imagined.

I'm so glad I didn't know how hard those following months ahead were going to be as I may have just given up there and then. What I do wish I'd been told is that it would take time, that there would be other factors that would interfere with my relationship with B, and that I could not control those things. But what I could control are my feelings towards this innocent human being, and with that I could nurture my relationship with her. 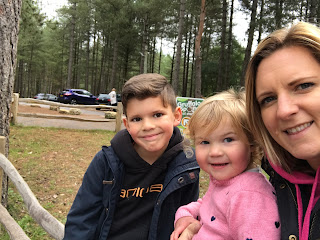 What does being a Step-Mummy mean??